With the first 6 months of 2022 over we have now had the time to reflect on many of the events that have occurred, and it has been a very busy time indeed! We have had the start of a war in Ukraine, bear markets for the major US indexes, the highest inflation since the 1970’s, interest rate rises (with more to come), plus an energy and food crisis.

The story of the first half of 2022 has thus been one of “stagflation,” with fears that the Federal Reserve will need to hike rates faster and further to contain inflation driving bond yields higher and equities lower.

The question now is what story will drive the market over the second half of the year: “Stagflation,”“reflation,” “soft landing,” or “slump”? And how will markets react? Now that Fed officials have indicated how closely they are watching and reacting to monthly data, each inflation data point will likely cause volatility. Yet it will take several months of data, at a minimum, for the market to gain some clarity on what narrative will dominate the second half of 2022.

Does history repeat itself?

What is happening now has occurred many times in history. The outcome in general is predictable, even if the exact details of the new winners only reveal themselves slowly.

The global economy is constantly evolving, governments and central banks respond, and in turn influence this evolution both economically and politically. They often determine the incentives that lead individuals and groups to act. In turn those groups also influence government and policies in a constant feedback loop, this process effects the fundamentals of profits. Markets eventually reflect this.

Take 2000. Broadly, the winners or out performers running into 2000 were tech, media, and telecoms(TMT) as well as the US in general as the centre of innovation. Growth was the order of the day as people paid up for future earnings of TMT companies far out into the future. The idea was right, but investors just got ahead of themselves with what multiples they were willing to pay, and which companies had genuine businesses. The flooding of the system with cash to deal with Y2K created abubble in this area, people gave up their jobs either to join a start-up or to day-trade the bubble sectors. Other weird things happened like trading of “assets” with no value like beanie dolls. Sounds a bit familiar.

As the market fell under the load of the tech bubble and 9/11, central banks and governments in general reacted. Interest rates dropped from 5% to 1%, creating the seeds and invectives for a credit bubble in housing to come. But all the way down in the TMT bear market and into the recovery people kept buying TMT and the US, the scene of the previous crime – looking in the rear-view mirror.

The Nasdaq returned just 1.6% a year in the first decade of this century.

What did perform in that decade?

The 1997/98 Emerging Market (EM) crisis had put a stigma on investing there. Value investing had all but gone out of business by 2000 as they were viewed as dinosaurs heading into the tech and growth peak. Hedge funds were just becoming open to the wider public. Commodities had been in a bear market for a long time.

What were some of the best performing assets during the market declines of 2000 and the subsequent recovery into 2008? EM, commodities, Value, and hedge funds. EM produced annualised returns of16% a year from 2000 to 2010.

Pariah industries like tobacco produced remarkable returns in the 2000s. Utilities which were seen as boring during the tech boom also produced stellar risk adjusted returns. The mining companies that had seen very little investment in the 90s increased by 500% to 1,000% during this period.

Investors missed the fundamental shift in China and the need for commodities which bottomed in 1999. The demand from China lifted all Emerging Markets along with the outsourcing of western companies. The 2000s would be the decade of EM, commodities, and housing. But it took time to get a grip of the changes in macro fundamentals and for the investment community to get rid of their affair with the previous winners and get on board with the new ones.

Come 2007/ 08 the world economy fell over under the weight of the debt in the housing markets which were induced by the incentives created by Central Banks. But all the way through that debacle there was a belief that EM and commodities were immune to the issues. Investors had sold themselves a story about the new China/BRIC paradigm as that is where the performance had been.

However, what was missed was that the reactions of governments and central banks to the crisis was changing the structure of the economy again and therefore the winners and losers. Right up to the summer of 2008 commodities were making new highs, Bear Sterns had gone bust, and the plumbing of the global financial system was being tested, but Emerging Markets (at the time a space heavily dependent on global liquidity) were still close to their highs and the mining companies were making new ones, just as global liquidity was being severely impaired. As we approached the lows in March of2009, investors looked once again in the rear-view mirror and bid EM and commodities back up again.After all EM couldn’t be blamed for the excesses in the housing market, it was natural that they would come back out on top again. Cause and effect were mistaken. Investors extrapolated the previous performance and story forward. How could they not recover to their former glory?

What were some of the worst performing assets or regions of 2010s? Commodities, Hedge Funds andEmerging markets. It took three years for those investors to give up and move to where the economic structural changes said they should invest, Tech, Growth, and the United States. To get investors to invest in the US and Tech after the scarring from the previous decade still in their minds was difficult.People were still trying to recoup their losses from 2000 and dealing with the losses from 2008/09which was perceived as being caused by the US.

No one wanted to overweight or have at the core of their portfolio in Tech, the US or growth. They were once again looking in the rear-view mirror at EM, value, and commodities. But the economic fundamentals had changed. In the 2010s the Nasdaq returned circa 17% a year vs 3% for Emerging markets and -1.5% for commodities.

These have all created the set up for a regime change in the investment world, because the sources and style of profits have changed. The tariffs represent the stalling, perhaps the reversal of globalisation. Covid and the response changed the economic structure of all economies introducing amongst other things inflation which effects the price level of everything. We will discuss more of this no doubt as the year progresses.

There are other interesting similarities between now and previous cycles, they may just be a coincidence. Most cycles have ended with a liquidity infusion which has put the final ramp up in the previous cycle’s winners. Ahead of 2000 the world was flooded with liquidity to deal with Y2K, theNasdaq doubled in 9 months. In 2007/ 08 the Fed dropped interest rates to deal with the housing market and the pressure on banks – commodities doubled in the 9 months into June.

In 2020 the authorities committed to the biggest liquidity surge in history and the Nasdaq doubled in7 months and almost tripled in 15 months. All the companies/assets that had done well in the previous decade – tech, innovation, crypto, growth, long duration bonds and assets went into overdrive from the low in March 2020. Slowly, slowly they have given back quite a lot of those liquidity induced gains.In the meantime, other sectors of the markets that have been ignored over the last decade have been steadily showing signs of future leadership.

Where does this leave us?

Those portfolios that have been suffering the most in recent months are those laden with the previous cycle’s winners. If the above observations are in any way correct it may be that the virus, the surge in inflation, creeping deglobalisation and the concomitant government and Central Banks response has changed the profits fundamentals and therefore the investment environment.

This would suggest if there were more weakness to come it will be the wringing of excess from the winners of the 2010s. In the meantime, investors might consider searching out for the core of their portfolios areas that enjoy the climate of the new economic environment, are under-valued, under-owned and showing signs of leadership. Based on historical economic climate changes, they may not be growth, tech, innovation and crypto.

We have selected four key indices as a representation of the markets rather than a substitute for the whole market as they are probably the most recognisable for our clients.

All the major Central Banks now have a mandate to ensure that interest rates rise and fall to ensure that inflation is stable, which in most instances is 2% per annum, the “goldilocks” scenario where the underlying economy is neither too hot nor too cold.

‍What asset classes should we consider?

There are some broad conclusions we can draw from the current climate as its likely that the US will go into recession (albeit not a severe one), inflation will remain high in the short term, and then comedown, but not back to the 2% target (will 3% be the new norm?). The same with interest rates, we can expect a rapid rise this year followed by a rapid decline next year to boost growth and keep any recession short.

We are therefore asking our panel of investment managers to consider well diversified portfolios, particularly from a cashflow and regional perspective, think Asia not US for example, as the purchasing power of companies is the key to maintaining margins and profits. Contrary to the above this means that companies like Amazon could still be a good buy at present, especially at a 45% discount to theirDecember value.

Another example of the changes is that active and specialist management should do well in this environment, so for example, hedge funds rather than ETFs.

We have also encouraged Value and dividend paying companies alongside “real” assets such as property and private equity where there is a sacrifice of short-term liquidity for longer term gains.

The markets could fall further over the summer as the concern that the analysts haven’t downgraded company’s earnings enough, but at some point we will see an inflection point, and this will signify anew paradigm.

We need to discard the old and embrace the new. 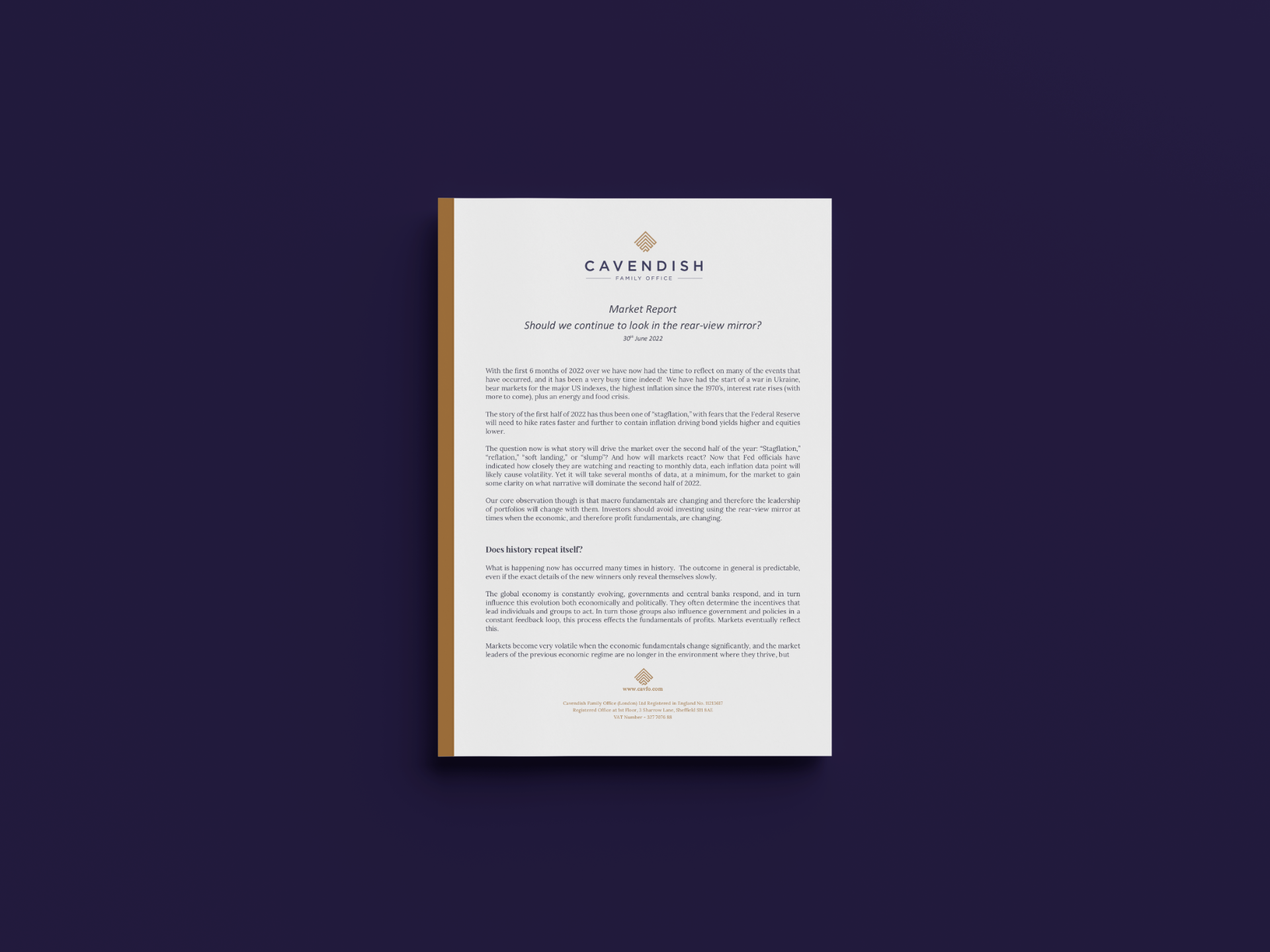 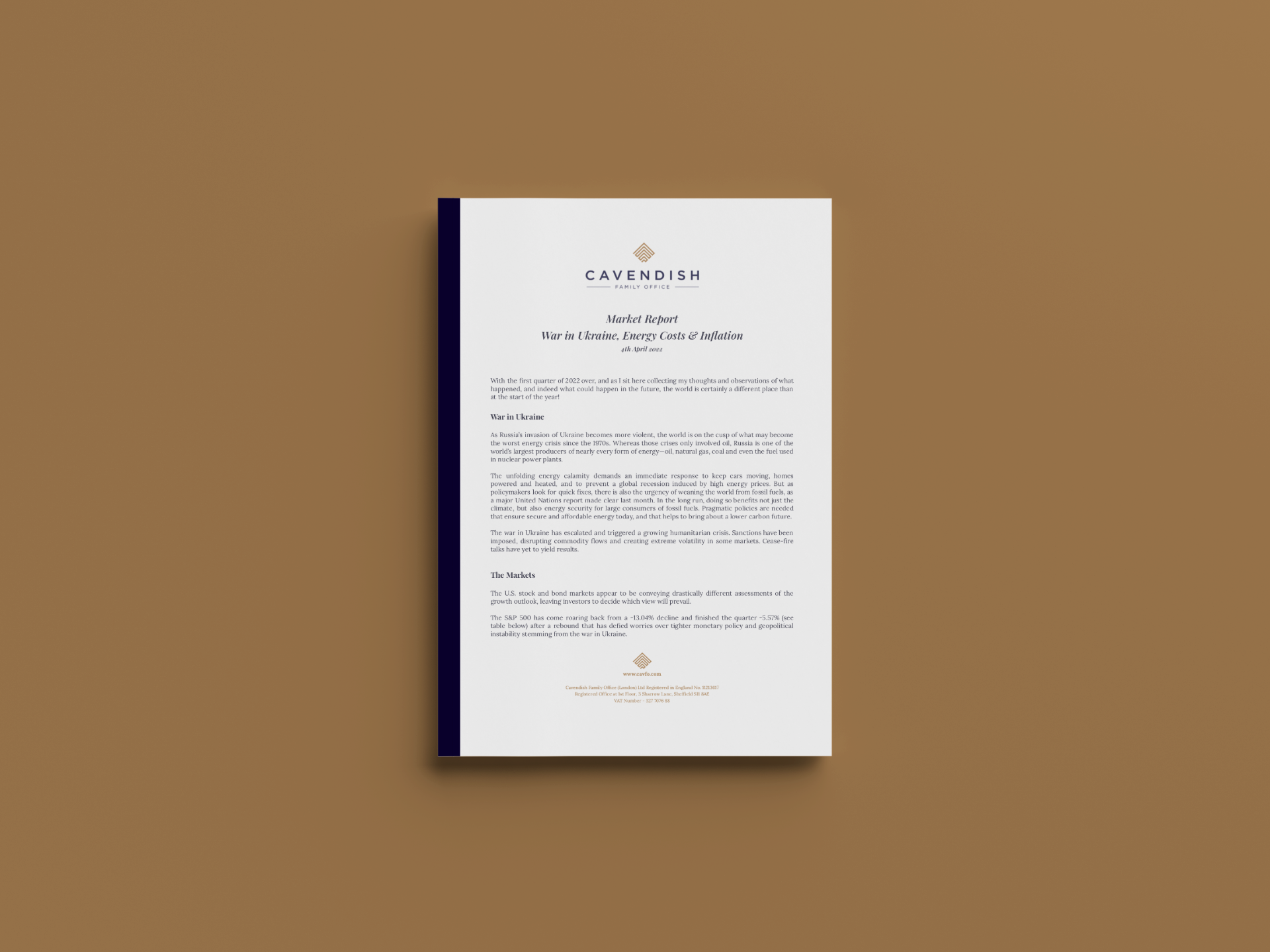 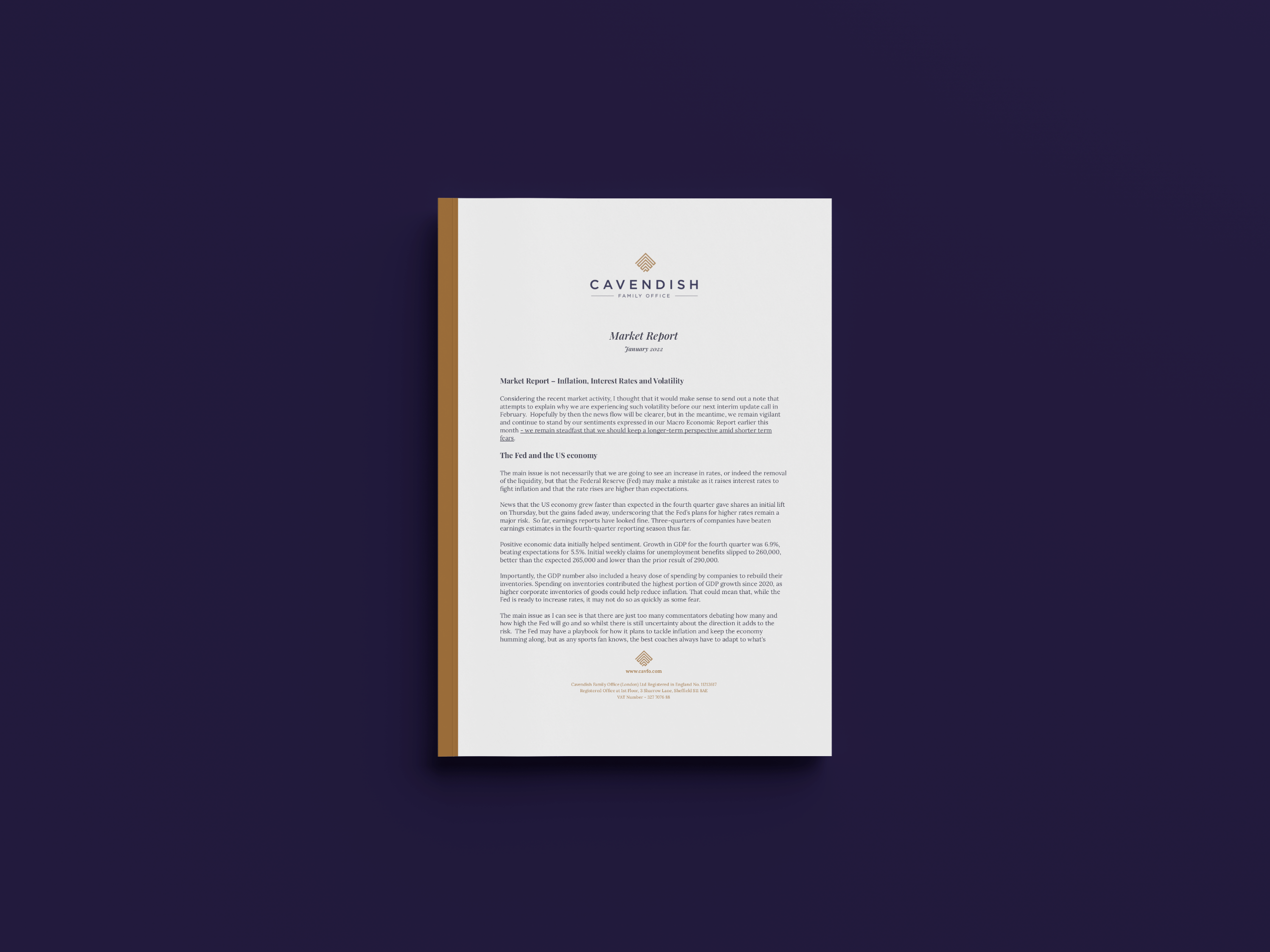